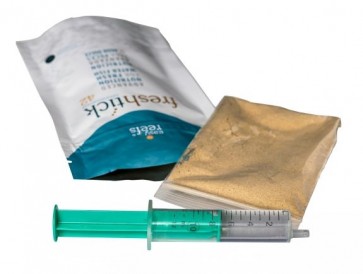 The diet that works for impossible fish!

Aquatic Now is for businesses only but consumers can still view all products!

Freshtick is a blend of diverse, all natural, self-production, highly technical compounds, providing natural and balanced nutrition for omnivorous freshwater fish and invertebrates.

Unlike most pelleted fish foods, Freshtick is a powder that can be rehydrated with water to form a paste. This paste can then be stuck to any surface in an aquarium, allowing fish to graze much more like they would in the wild, which means that Freshstick does not need any attractants, artificial preservatives or synthetic products to feed even the most finicky feeders. Complete made from aquacultured aquatic products, it contains no aquatic unnatural land based filler/nutrient top up feeds like alfalfa and vegetables.

Freshstick provides an essential source of proteins, lipids rich in fatty acids (EPA, ARA and DHA), vitamins and carbohydrates, all from natural sources of aquatic origin.

The rehydratable powder formula allows Freshstick to be blended with any mollusc or crustacean pulp as well as eggs from fish, molluscs and crustaceans, artemia, mysids, bloodworm, rotifers and medicines that are administered orally.

Once prepared and introduced into the aquarium, Freshstick does not disperse into the water for hours, so it can be completely taken advantage of by fish and crustaceans. This feature allows the product to be used as “ad libitum” or rationed feeding.

Because Freshstick is comprised mainly of freeze-dried crustaceans, it does not contain fish skeletons and is thus very low in phosphates compared to its protein content.

Freshstick is made with the freshest and highest quality ingredients. The blend consists mainly of shrimp (Palaemonetes varians) harvested in our Veta La Palma Natural Space which are immediately freeze-dried to maintain an optimum nutritional value. Freeze-dried microalgae and macroalgae is also added to the bled in order to satisfy the nutritional needs of a wide variety of freshwater fish.

Add RO water to the Freshstick bag in a ratio of 2:1 Freshstick:Water. For a bag of 42g, add 20-21 ml of RO water. Knead inside the small ziplock bag until a homogeneous mixture is obtained. Once the mixture is homogeneous, Freshstick may be used immediately, be kept in the fridge for a couple of days, or freezed for up to 5 weeks without losing its nutritional values. Take a portion of Freshstick and stick it on a rock, bogwood or preferably on the aquarium glass. Try to start with a small portion and increase it proportionally according to the needs and response of your systems.